Inspired by Battles with Cancer 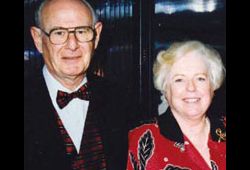 "We are so pleased with CRI and our hope is that during our lifetime a vaccine will be developed for every cancer."

Louise and Peter Moseychuk have both led lives in the service of others. Peter owned his own business, supplying construction companies with power-activated tools, and Louise was one of the few women to join the New York City police force in December of 1960. "I believe in giving in service to others," said Louise. "You only have one life to live, and I wanted to help people."

Cancer took a toll on both Peter's and Louise's families early on in their lives. Peter's mother passed away from bone cancer, while Louise lost her mother and her aunt to breast cancer. The Moseychuks were personally confronted with the disease again in 1992, when Louise was diagnosed with uterine cancer. Louise would go on to fight cancer twice more, facing malignant melanoma in 1997 and then breast cancer in 2003.

Louise remained determined, however, and came out victorious in each of her battles with the disease. It was this unfortunate intimacy with cancer that inspired Louise and Peter to start giving annually to the Cancer Research Institute in 2002. "We are so pleased with CRI," said Louise, "and our hope is that during our lifetime a vaccine will be developed for every cancer."

Including CRI in Their Plans

This past spring, Peter and Louise decided to include CRI in their estate plans. "We believe that CRI is the best chance to further research in the field and create cancer vaccines," said Louise. The Moseychuks believe that the Cancer Research Institute's immunological approach to confronting the disease is the most powerful means to defeat it.