Giving for a Different Future 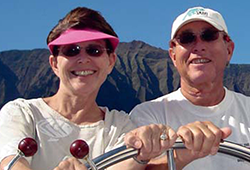 "Our contribution is for a time beyond us-beyond our lives."

Don and Diane Holmes met in 1966 while working as scientific software developers at NASA's Goddard Space Flight Center outside Washington D.C. "It was the early era of space exploration, and an exciting time to be there," Don remembers. "Watching the launch of the first unmanned spacecraft, seeing the first photographs of Earth from space-you felt a strong sense of purpose." Don and Diane married in 1968.

Thirty-three years later, in 2001, Diane was diagnosed with breast cancer. "My father died of cancer, and my aunts died of cancer," Diane says, "so it was a big fear of mine." Fortunately, a routine mammogram caught Diane's cancer early and her surgeon was able to successfully remove the tumor. "I knew my life was saved as a result of years and cancer research," Diane says, "and I was compelled to give back what I could."

Don and Diane set up a charitable remainder trust and selected the Cancer Research Institute to be a future beneficiary of its principal. Diane explains, "We chose CRI because we liked its philosophy: that our own bodies are capable of creating an immune response to cancer, and that we can treat cancer with medicine that works with the body and not against it. We researched a lot of cancer charities and found CRI's work to be the most promising."

"Our contribution is for a time beyond us-beyond our lives," Don says. "It's about altruism, investing in the future of mankind, helping the exploration along."

Today, Don and Diane are happy retirees, living in Morgan Hill, California, close to their two children, Christi and son-in-law Jeff, and Scott and daughter-in-law Trulie, and their three grandchildren, Adam, Audrey, and Abbie.