Giving and Traveling the World 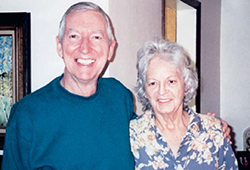 "In case I get cancer, the research could help me."

Hugh Kennedy travels all over the world and lets his annuities do the funding.

After he retired from a 30-year career as a professor of Spanish language and literature at California State University, Los Angeles, Hugh wanted to devote his time to exploring new countries and meeting new people. He found that his investments had paid off, and he could maximize his return by creating gift annuities to provide him with fixed payments for his lifetime.

Hugh selected the Cancer Research Institute as a beneficiary after he lost his older sister, Mary Jean, to breast cancer and other family members to leukemia. He says he also chose to support CRI for less altruistic reasons. "In case I get cancer, the research could help me." But, in fact, a gift given to support research inherently benefits others, as the impact of a discovery can resonate throughout the field.

Hugh has established at least six annuities at organizations around the country that focus on causes of concern to him. Each subsequent year that he creates an annuity, he is able to secure a better rate, because the rates rise with the age of the annuitant. The process was never difficult; after receiving an acceptable proposal, he "just signed at the bottom and sent the check." Hugh requested that his payment arrive quarterly. This arrangement gives him the security of scheduled income as well as the ability to visit worldwide destinations. He explains that "the income is terrific, and the fact that I am actually helping people makes it even better."