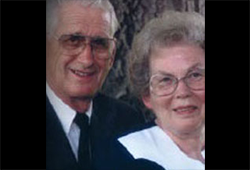 "We have benefited from the results of past donations to cancer research and now we want to contribute to help people who get cancer in the future."

Ever since he served as a Navy medic at the conclusion of World War II, Rex Ashdown has had a fear of cancer. Because of the circumstances in the war and the fledgling state of cancer treatment at the time, he watched numerous sailors in his care suffer excruciating pain caused by the disease despite the morphine he provided for them. Many years later, when Rex and his wife, Virginia, confronted cancer themselves, they were very grateful for the researchers who had developed therapies over the years that have significantly improved long-term survival and quality of life for cancer patients. After the war, Rex used the GI Bill to help him get through school. He earned a doctorate in social work, while Virginia kept busy raising their eight children. "You could say she achieved a few graduate degrees in parenting," Rex quips. Rex taught Sociology and social work at Weber State University, and they were both very involved in their church community.

Their strong bonds with family and community would help Rex and Virginia survive two cancer scares. Virginia was successfully treated for breast cancer about 12 years ago. Then, eight years later, Rex learned that he had non-Hodgkins lymphoma-a cancer of the immune system.

After undergoing very aggressive therapy, he is in remission and considers himself "clean" today. Rex is very aware of the impact that cancer research had on developing his advanced treatment. "We have benefited from the results of past donations to cancer research and now we want to contribute to help people who get cancer in the future," he explains.

In 1990, Rex retired after 10 years as the director of an adoption and foster care agency and 20 years as a college professor. Today, he and Virginia are highly engaged with their church, children, 32 grandchildren, and 20 great-grandchildren.

When they received an inheritance six years ago, they consulted with their children, who urged them to use it as they wished. After talking with a financial advisor, they created a unitrust, which provides them with a fixed percentage of the annually determined value of the trust assets for their lifetimes with the remainder going to the charities of their choice.

The Ashdowns chose the Cancer Research Institute as one of their beneficiaries. "We are just so glad that scientists have come as far as they have in cancer research," Rex says. "Virginia and I know that it takes millions of small steps to make the large discoveries that are needed to conquer cancer. We hope that the gift through our estate will pay for one of those steps."